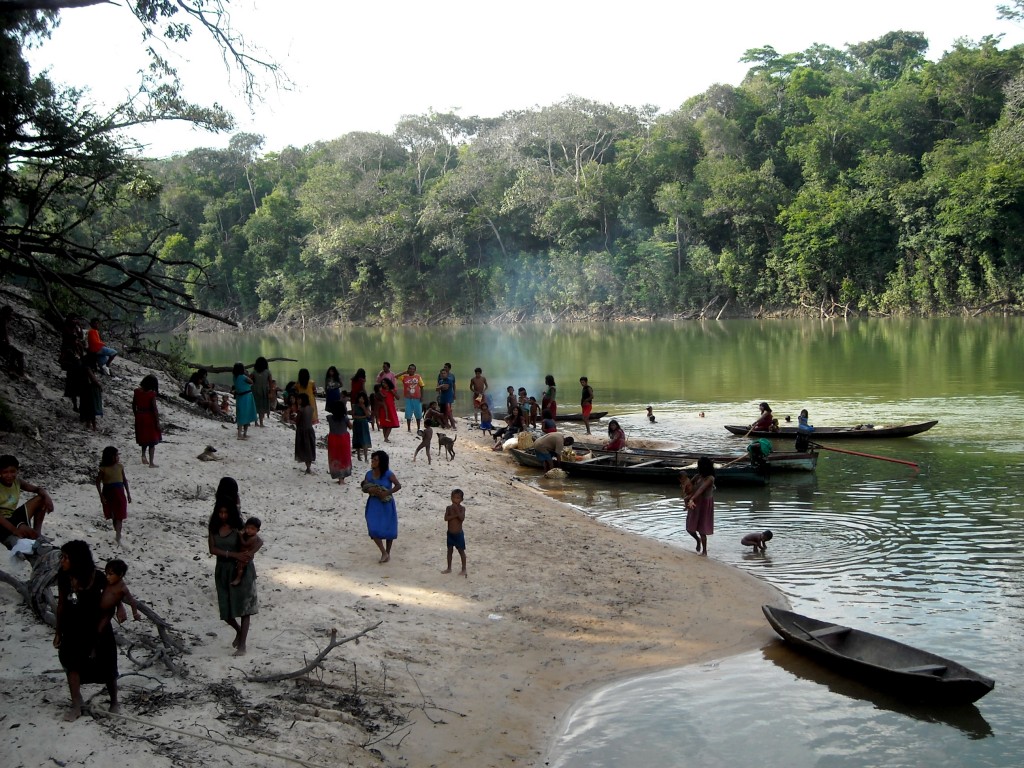 In the decades since I began field research on the Pirahã language, in December of 1977, 39 years ago, no one else has done any descriptive linguistics field research on this language. Brazilian Anthropologist Marco Antônio Gonçalves did about 18 months of field research in the late 80s and early 90s, to produce both a master’s thesis and a PhD in anthropology, on Pirahã naming and cosmology respectively. He never learned the language, but he did provide initial coverage to important topics in Pirahã culture.

Salles’s efforts are thus a new addition to the Pirahã linguistic literature. And knowing as I do how challenging field research is along the Maici, I salute her efforts. It is a bit surprising that of the 200 indigenous languages spoken in Brazil, many of which are urgently in need of documentation, she would choose instead to work on a language as thoroughly documented as Pirahã. But she states her reasons clearly at the outset: “It has been claimed that the Pirahã, a Brazilian native language spoken in the Amazon region, is non-recursive, disallowing syntactic embedding altogether (Everett 2005). This thesis investigates that claim.”

It is my understanding that Salles is currently writing a PhD thesis on Pirahã at the University of British Columbia. I had therefore expected to wait for the completion of that more mature study before replying to these analyses and counter-analyses. But this initial work seems to be circulating to an extent that I felt it would be worth a brief review here, reserving a larger consideration for published or doctoral work.

The MA thesis focuses on self-embedding in nominal constructions. Before offering an assessment of the data and analyses in that domain, I want to begin by noting that several important methodological details are not included in the thesis, which makes the rest of the work hard to evaluate.  In particular: (a) How was the research carried out? This includes things such as the actual amount of time spent in the village and how the time in the village was used. For example, how many actual weeks of village living was this thesis based on? (b) How many hours of elicitation did she engage in daily? (c) With how many language teachers did Salles work? (d) Were the teachers all men or all women or a mixture of both? (e) How did she check her transcriptions and translations before leaving the village? (f) Did she contact other known experts on the language? (g) Did she conduct a full literature review on the language? (h) Are the data available (such as http://journals.plos.org/plosone/article?id=10.1371/journal.pone.0145289)?

A more serious methodological criticism of the work is that Salles never learned to speak Pirahã. As she states at the outset, none of the Pirahã speak Portuguese, but what she calls a type of “pidgin language” (actually a mixture of Nheengatu, a former trade language of the Amazon with a few Portuguese words, as I discussed in my 1979 MA dissertation, which she fails to cite). One can tell from the thesis that she lacks a speaking understanding of the language, due to the failure to even attempt to represent tone or intonation and inaccuracies throughout her mixed phonemic and phonetic representations (The only examples of Pirahã grammar that show tones, a crucial component of Pirahã grammar (not merely phonology) come from my work.) Without a mastery of these, there can be no speaking ability of Pirahã beyond extremely rudimentary communication. Certainly nothing as sophisticated as would be required to investigate recursion or semantics. As mentioned, her transcriptions are neither phonetic nor phonemic, providing a mixture of some of the orthography I have proposed, with her own impressions. She omits glottal stop (inadvertently or because she didn’t hear it) frequently in word-initial position and often represents underlying /b/ as [m] in her transcriptions. [m] is merely a surface allophone of /b/ in Pirahã (Everett 1979).

Salles does cite José Augusto Pirahã (known better as “Verão,” named after the missionaries that preceded me among the Pirahãs, who, like me, were members of the Instituto Linguistico de Verao) favorably. I suspect (given the lack of discussion of her language teachers, perhaps I am mistaken) that he was in fact her main research assistant and teacher during her field research. Augusto never lived in a Pirahã village until he was in his 20s. His father would speak to him in Pirahã occasionally. Raimunda had a reasonable passive comprehension of Pirahã as did Augusto and his siblings, but I never heard any of them speak the language. Nor does he speak it fluently now. Augusto’s ability in the Pirahã is at best a 2 on the four-point scale of the “Interagency Roundtable Scale.” (https://en.wikipedia.org/wiki/ILR_scale#ILR_Level_2_.E2.80.93_Limited_working_proficiency). I do not believe that he would dispute this if asked, though it is likely that he has learned much more of the language since last I saw him, so his fluency could have risen to level three. Augusto is simply unable to accurately translate Pirahã examples at the level required for detailed morphosyntactic analysis, nor for semantic readings of any subtlety. No more than many indigenous community members around the world whose families have shifted to a trade language.  Given these limitations, the entire thesis is cast into serious doubt.

Nevertheless, let’s examine the data that Salles provides. (I add the tones that she omits and correct her transcriptions, as necessary, using her example numbers):

Example (61) is identical to one I discuss in my PhD dissertation and much subsequent work. I used it as the kind of example that once led me to believe that Pirahã syntax was recursive.  However, when working more carefully with the Pirahãs, they in fact reject such sentences and never are multiple adjectives used in natural conversations or texts. This kind of example is relatively easy to get in sentence-level elicitation, however. And the easiest way to get them, apparently exactly how Salles collected them based on her caption of a photo of her outside of the village in a black dress (p129), is to ask the Pirahãs “Can you say this?” “Or is this OK?” They tend to say yes to most anything they can understand following such a question. When I asked them why they never said (61) outside of elicitation, they replied, “Because we don’t talk like that.” I replied “But you said I could say that.” “Yes, you can say whatever you want. You are not a Pirahã.” It is a bad methodology as I learned. Had Salles read my own work, she might have at least explained why she insisted on using this methodology in spite of its severe problems. This is another indictment of bilingual vs. monolingual field research, something that Salles is limited to not speaking the language well. Yet I have written and lectured extensively on the dangers of bilingual field research in essentially monolingual environments.

I won’t go through all of her other examples, choosing just one or two more. The common thread running through all of Salles’s examples, however, is that they are given with incomplete phonology, out of context, without remarking on who uttered them, under what circumstances, or whether corresponding examples were found in texts. Only in natural discourse can we see whether or not these are natural utterances or artificial outputs of the single-sentence elicitation method, in a language the Pirahãs do not speak.

There is, in fact, not a single example of Noun Phrase “recursion” anywhere in Salles’s thesis that is not disembodied. The Pirahãs can understand any of the examples given, I suspect. But that is very different from uttering them naturally or accepting them as grammatical in the sense of modern linguistic theory. Let’s take her example (85) to drive home this point (again, I supplement her transcription with tones and the correct “phonemic” representation):

Actually, this sentence is simply a series of words. It couldn’t mean anything as a noun phrase because “motor” is a type of boat and would not occur in a single phrase with “canoe.” It looks like a paraphrase or an appositional clarification. To support the idea, however, that it means what Salles claims it means, ” Kapóogo’s big canoe motor,” one would have to provide an example in which all of (85) is either the subject or the object. She does this for example (62), but as I stated, this is in fact ungrammatical. With regard to other examples,  I predict that no such embedded version exists because these are not well-formed Pirahã phrases. Only one of Salles’s apparent recursive noun phrases is shown in any grammatical argument position in a sentence. But that is one from my own work that I have explained in later publications to be ungrammatical. That would be a minimum requirement to support her analysis. And on top of that, it would have to be shown that these examples came from a native speaker not simply a native speaker agreeing with a question posed by her, such as “Can you say this?”

In short, this thesis is methodologically unsound. It suffers from working with a non-native, non-bilingual informant whose first language is Portuguese, from asking Pirahãs questions about sentences or phrases in isolation, from failure to place the crucial examples in a sentential or discourse context, and from any evidence that the Pirahãs spontaneously supplied these examples without prompting, as answers to questions they understood.

I will make just one more comment. At the end of the thesis in the appendix, Salles shows the Pirahãs drawing a map and posing beside the map they drew. But “map” is a highly abstract concept from very different cultures. Did they actually realize that they were attempting a two-dimensional representation of a portion of their reservation, as the map label indicates? Or were they simply representing bits and pieces of the scene in front of them? And who did most of the drawing? The man shown drawing is an old friend of mine and I know that he has never drawn anything more than a fish (which he seems to be drawing here) after being taught to do so by Keren Madora, my ex-wife. If this was drawn by the actual Pirahãs and not by Augusto or instructed by anyone, then it represents a cultural shift. This would not be utterly surprising since Brazilian government agencies have been running a school, building western-style buildings, adding electricity in villages, and otherwise introducing dramatic cultural changes into the Pirahã village at Piquiá, exactly where Salles worked, for some 9 years now.

To wrap up, I am glad to see that Salles is doing field research on the Pirahãs. She has chosen to work in a very, very difficult linguistic situation. Good intentions aside, though, her thesis does not deliver. There is nothing remotely convincing in it that Pirahã manifests either recursion or embedding.

What enabled me to finally recognize the error of my recursion-based analysis of Pirahã was when I attempted to translate the New Testament (this also led to a profound conversion in me from believer to atheist, as I have documented in many places). Without the fundamental semantic understanding that such an exercise, with many language teachers, checked in numerous ways for comprehension, it is nearly impossible to tease apart the judgments necessary for something so challenging as determining whether a language lacks recursion or embedding. Even Donald Davidson, in his famous 1968 article “On Saying That” argued that English quotatives were non-embedded. These things are not transparent.

A full listing of my works on Pirahã is found here: https://daneverettbooks.com/wp-content/uploads/2014/04/Daniel-Everett-CV-11.29.16.pdf

Next Post
Translation for an interesting Piraha text
Previous Post
Who’s afraid of the big bad Wolfe? Apparently everyone.
Menu
We use cookies to improve your experience on our site. To find out more, read our Privacy policy. If you continue to use this site, you agree with it.
AGREE