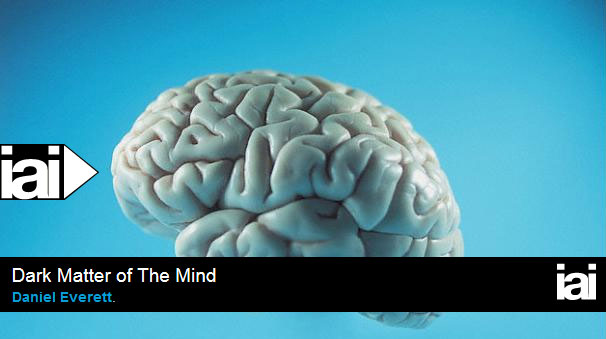 8 years ago
Now that my latest book, Dark Matter of the Mind: A Culturally Articulated Conception of the Unconscious, has been sent to the publisher, I plan to begin a blog here on culture and language. The first entry is a bit technical, though my intention is to keep most of the future entries a bit lighter, never very technical, discussing issues of Amazonian languages, the unconscious, linguistic theory, anthropology, philosophy, and psychology.

I have in past publications (many of them listed on this site) criticized Noam Chomsky’s claim that all languages are built on a recursive grammatical procedure he calls “Merge,” defined as in (1):

If α is a verb, e.g. ‘eat’ and β a noun, e.g. ‘eggs’, then this will produce a verb phrase (i.e. where alpha is the head of the phrase), ‘eat eggs’. As I said in Everett 2015, “The operation Merge incorporates two highly theory-internal assumptions that have been seriously challenged in recent literature. The first is that all grammatical structures are binary branching, since Merge can only produce such outputs. The second is that Merge requires that all syntactic structures be endocentric (i.e. headed by a unit of the same category as the containing structure, e.g. a noun heading a noun phrase a verb a verb phrase, etc.)

My criticism is based on the fact that the Amazonian language, Pirahã, among others, lacks recursive structures. One of the most common objections my critics raise is that the superficial appearance of lacking recursion does not mean that the language could not be derived from a recursive process like Merge. And this is correct.

The critics often proceed from this banal observation to conclude that I am either deliberately or ignorantly failing to understand the difference between Greenbergian and Chomskyan universals. This is an old accusation, one that I have rebutted in numerous publications, but apparently one that gives some critics comfort, as they make their living selling pieces of Chomsky’s shadow.

The late Joseph Greenberg was a professor at Stanford University and was the first researcher to make serious proposals on linguistic universals: forms or implications between forms actually observed in all or most of the world’s studied languages. Thus Greenbergian universals refer to things that can actually be observed and thus easily falsified.

Chomskyan universals are quite different. Chomsky’s concept of universals includes the notion of what he refers to as “formal universals.” Formal universals are grammatical principles or processes or constraints common to all languages – that is, supposedly following from UG – at some level of abstraction from the observable data. Thus these refer to things that cannot be seen except by the appropriate theoretician. Unfortunately, this makes formal universals difficult to falsify because they can always be rescued by abstract, unseen principles or entities, e.g. so-called “empty categories” (which frankly I find reminiscent of Kepler’s “epicycles” – invisible to all but the initiate).

Take recursion. The Chomskyan claim would be that all languages are formed by a recursive process, even though the superficial manifestation of that process may not look recursive to the untrained eye. So long as we can say that a sentence is the output of Merge, limited in some way, then it was produced recursively, even though superficially non-recursive.

The Greenbergian way would be to say that either you see recursion or it is not there.

Both positions are completely rational and sensible. But as I have said the Chomskyan view renders the specific claim that all languages are formed by Merge untestable. In Chomsky’s earlier writings he claimed that if two grammars produce the same surface strings (weak generative capacity), we can still test them by examining the predictions of the structures they predict for the strings (strong generative capacity). Since most of my work on Piraha recursion has been to show that the predictions Merge makes are all falsified, I have dealt exclusively with strong generative capacity. The bread and butter issues. On the other hand, clever lads and lasses can add epicycles to the accounts to save Merge but, again, with two effects: (i) it loses all predictive power and (ii) it provides a longer, hence less parsimonious, account of the same structures.

The Chomsky-Greenberg split is only apparent in this case. Piraha falsifies the Chomskyan formal universals predictions/account (sans epicycles, i.e. the bare claim of Hauser, Chomsky, and Fitch (2002)) and is irrelevant to a Greenbergian account, exactly the opposite of the normal dialog occurring among my critics.

I often think that the explanation for this refusal to understand why one can claim that the lack of data to support a proposal, e.g. Merge or recursion, is a serious problem, is best stated by Upton Sinclair: “It is difficult to get a man to understand something when his salary depends on his not understanding it.” When folks make their living in a particular theoretical framework, it is highly unlikely that they will consider the possibility that their life-investment was placed in Confederate dollars.

Next Post
Out of Africa
We use cookies to improve your experience on our site. To find out more, read our Privacy policy. If you continue to use this site, you agree with it.